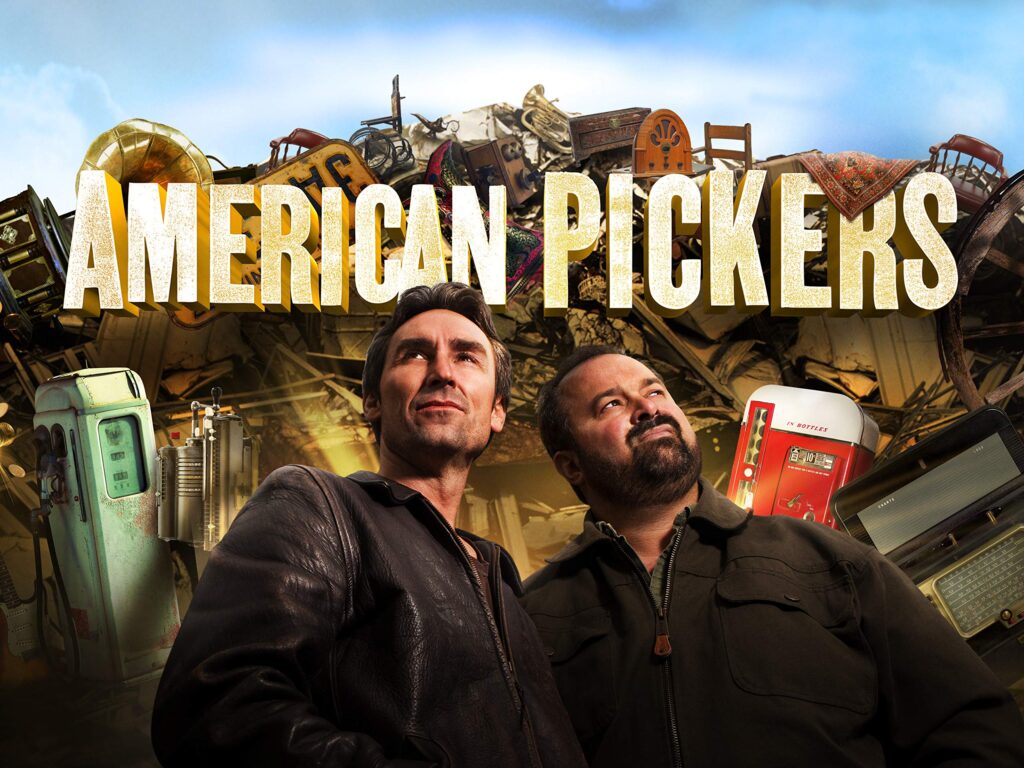 It may be my birthday, but that doesn’t mean you can’t get a gift, as well! I’ve alluded to this over the years, but I’ve never shared the full story. I was cleaning out my email a few days ago, in an attempt to achieve “Inbox Zero”, and I ran across an email I sent to the History Channel show American Pickers one drunken Friday night a few years ago.  First, however, some backstory.

For those new to this site, I sometimes do a feature called Thrift Justice, where I showcase the crazy finds I come across at thrift stores and yard sales. The posts are few and far between these days, but it used to be a pretty frequent thing. Anyway, at its height, I found myself also becoming engrossed in TV shows like Storage Wars and Pawn Stars, where everyone was hoping their next find would be their ticket to retirement. Of course, those shows were staged, and I kinda drifted away from them once that all came to light. However, there seemed to be one bastion of honest treasure hunting still on the tube: American Pickers. If you’ve never seen it, it follows Mike Wolfe and Frank Fritz as they travel the country looking for rare finds to add to their shop. They’re “pickers”, who typically receive a tip about some old hoarder back in the woods, who ends up giving them access to his property to find artifacts to buy off of him. Game knows game, and it’s the same with pickers. Most of them have been doing it for decades, and there’s something of a feeling of pride when another picker comes along and wants to pick through your wares. It means you’ve got some good, rare stuff!

I watched the show for YEARS, and the formula was the same: Mike and Frank would drive down some back road, noticing things along the driveway, like rusted out rollercoaster cars, or old oil company signs. They rarely cold called, as when they did, the old codgers were less than enthused about having them on their property. No, most of these tips came from networking, so the people already knew ahead of time that Mike and Frank were coming. Mike or Frank would call Mike’s shop, Antique Archaeology, and tatted up assistant Danielle would relay the tip to them. They’d end up picking through the yard, or a nearby barn, and then they’d start haggling. The property owner would always say something like “Well, I know you’ve got to make some money off of it, so how about X?” That was always peculiar to me, though, as I wondered why the salty codger would care about Mike & Franks cash flow. He should be more concerned that he was going to make HIS money. Anyway, that was the formula, day in and day out. Driving around, back roads, old White dudes.

As long as I’ve thrifted, I’ve always been worried about supply drying up. You see, I do it for fun now, but it used to be something of a side hustle. In fact, I really threw myself into it to help pay for my wedding, and after that I became more of a hobbyist. The thing is, when I first started, thrift stores were still exactly that: thrifty goods for economical shoppers. The landscape has changed, however, as now EVERYONE is scanning the items as they go down the aisles. Everyone’s a reseller, so thrifting ain’t so special anymore. As I’m always looking to the next thing, I wondered if I could be a picker. I mean, it sounds fun, and you can uncover some nice, rare vintage artifacts. One big problem, though: I’m Black. It’s not like these dudes I saw on the show seemed like the kind who’d just welcome me with open arms. Sure, “You can’t judge a book by its cover”, but most of the covers on these dudes fell off decades ago. The more I noticed that a certain “type” of guy tended to be a picker, the more it started to bother me that there was this frontier that was closed off to me. One night, after a drink (I believe it was one gin  & tonic – yes, I’m a lightweight), and an hours-long American Pickers marathon, I’d had enough, and felt compelled to take my issue to the source. I found the email address for American Archaeology on their website, and I fired off the following:

Question Regarding Diversity In Picking

First off, I want to say that I’m a big fan of the show, and it has inspired me in my own treasure hunting. Keep making those episodes, and I’ll keep watching!

I’m writing because something has been on my mind for quite some time. As a thrifter of color, I’ve often wondered why we don’t see more pickers/collectors of color on the show. Since you’ve been at this for quite some time, I guess I’m wondering this: ARE there pickers of color? I’m at a point where I feel like they either don’t exist OR they don’t cooperate with the filming. Otherwise, we’d have seen them by now, right?

I know that I wouldn’t be able to just go on someone’s property and ask to look around the way that you and Frank can – especially in some of the parts of the country that you guys explore. In your travels, have you come across fellow pickers who happen to be minorities, and have they shared any of their stories with you? I’d love to know what their experiences are like, and to see how they differ from yours and Frank’s. It might even make for a good special episode, maybe in February 🙂

Anyway, like I said, it’s been on my mind, so I felt it was probably time to go to the source and ask your take on things. I hope I’m not overstepping any bounds, and I thank you for your time.

Rereading that now, I’m struck by how friendly and articulate it was. I mean, keep in mind that I was DRUNK, but that’s what came out. I guess I was going for “killing them with kindness”. I mean, I was pretty sick of seeing the Jaspers and the Walters, and I just wanted to see a Leroy. Representation matters and all that. I don’t know if I expected a response or what, but it felt good to get it out, and taken to those in the know. According to the email, I sent this October 4th, 2005 at 1:40 AM. They HAD to know I was drunk. The only things sent at 1:40 AM are drunken emails and “You up?” texts. So, imagine my surprise when, just two days later, I received a response:

Hello, William!
Thank you for the email and the great inquiries!
We’re glad to hear you enjoy the show.

I’ve met quite a few pickers/collectors from a wide variety of minorities here in the shop, though I’m not sure how many Mike and Frank run in to in their travels. I’ll forward your email to the guys so they can possibly answer your questions! They’re currently on the road, meaning it’s a bit harder to hear back from them.

As you can see, it’s a little better than a form letter, but still didn’t really answer my questions. I was pretty giddy that this was probably written by Danielle, but I never did hear back from Mike & Frank. Maybe I was supposed to do some back and forth. A “Thanks for the response, and I look forward to hearing from them!” I dunno. I suck at follow-up. I didn’t send that response so it all died on the vine. I’ll tell you this, though: I never watched the show again after this exchange. It wasn’t out of spite or anger. Honestly, it just stopped looking *fun* to me. It was kind of like a dream deferred. The silence seemed to be its own answer. I mean, if they really wanted to clear things up, and they had dealt with pickers of color, don’t you think they’d be pretty quick to defend themselves in that “We’re not racist!” way that folks resort to when asked these sorts of things? No, I feel like they didn’t want to make things worse by admitting it’s a pretty White pastime, so they just brushed it aside. That is, IF Dani ever gave them them message in the first place. Either way, it was a good ride, and I hear they’re still picking down those back roads. I’d love to be able to live that life, but I’d rather not get shot. I guess everything ain’t for everybody.