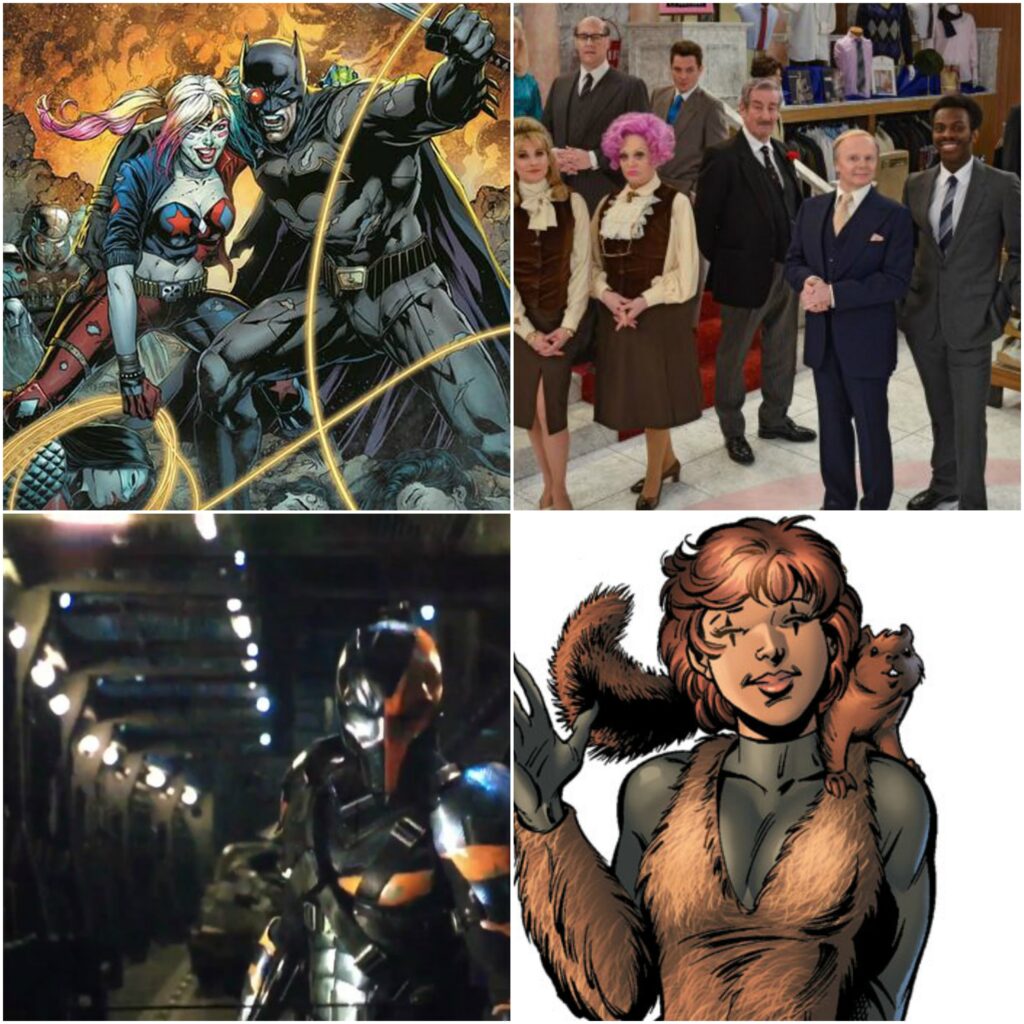 It’s a holiday weekend and y’all never read this thing when that happens, so let’s keep it short and sweet today, shall we? 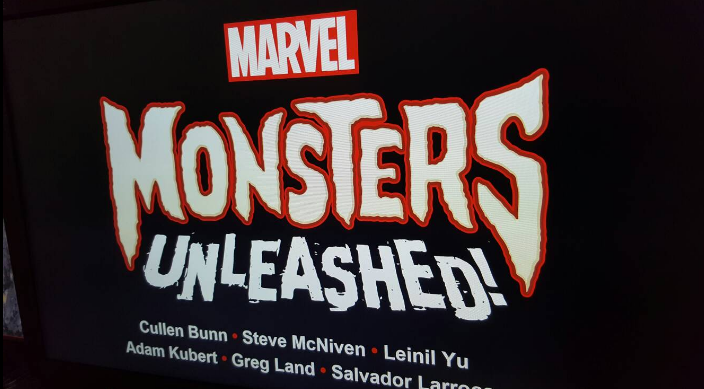 In comic news, the Diamond Retailer Summit is currently happening, so some news is trickling out of there. In the Marvel camp, they revealed a Monsters Unleashed series. Whatever. They’d been teasing something called MU for weeks, first revealing Cullen Bunn was involved and then slowly revealed artists, such as Leinil Yu, Adam Kubert, and Greg Land. Well, today it was announced it was this monster shit. I know some people are into all that, but I’m not one of them, nor do I feel like such an announcement deserved all that fanfare. It’s making me think that Marvel’s cried “Wolf!” one too many times. It’s also odd to me that a monster series is coming out in January instead of October. Also, they announced that the follow-up to Death of X and Inhumans vs X-Men would be called ResurreXion. Yeah, you read that right. I’ll bet someone in Marvel’s marketing department got an erecXion when they came up with that one. 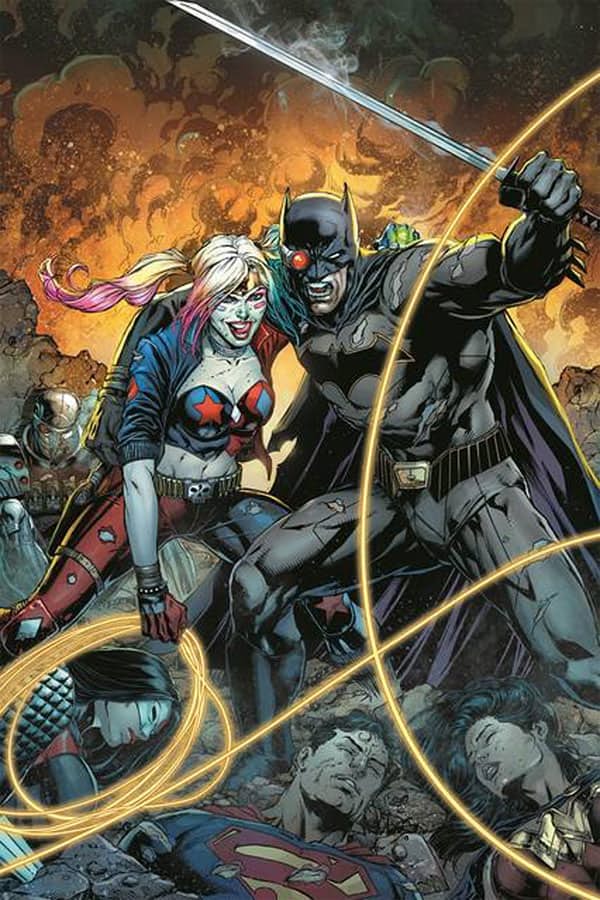 Meanwhile, DC announced their first major Rebirth crossover in the form of Justice League vs. Suicide Squad. I can’t help but feel like this would’ve been better timed to coincide with the release of the film, but maybe its release will bolster the Blu Ray sales, while getting folks primed for Justice League. In the story, Batman decides to take down Amanda Waller’s Task Force X – much like *SPOILER ALERT* Batfleck threatened to do in the post-credits sequence of Suicide Squad. And like all comic book fights, I’m sure they’ll be forced to team up against a greater threat. Anyway, it’s expected that a new Justice League of America series will spin out of this event. 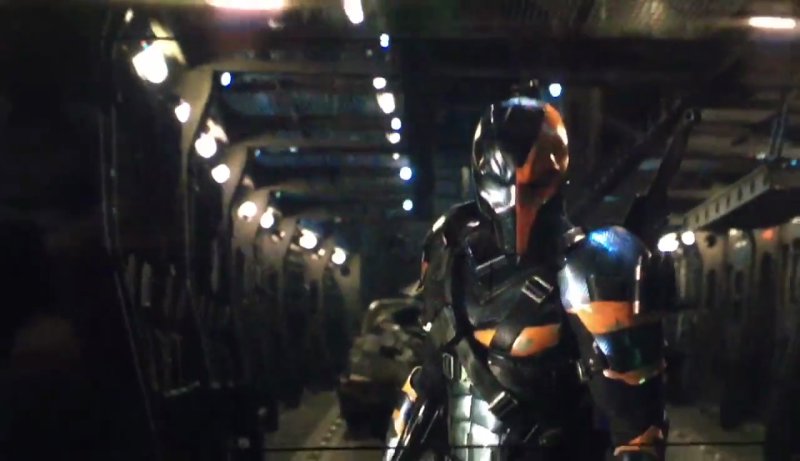 Speaking of Batfleck, this week Ben Affleck “leaked” some footage of Deathstroke the Terminator. Originally a Teen Titans villain, it seems that Mr. Stroke has been promoted to the big leagues. At first, it was believed this might be Justice League footage, but now the word on the street is that Deathstroke will be the main villain of Affleck’s standalone Batman movie. Oh, and it’s rumored that Joe Manganiello will be playing Deathstroke. Not really excited about it at the moment, but I probably will be as we learn more.

In TV news, it’s reported that Marvel is shopping around a comedy based on the New Warriors – but featuring Squirrel Girl. Now, this bothers me because Squirrel Girl was never in the New Warriors. Sure, I can understand creative liberties, but it seems like Marvel’s just desperate to create a Squirrel Girl vehicle and this is what they’ve come up with. First off, I don’t know if I like the Superhero Comedy genre for television. I think they should wait and see how DC’s Powerless (which looks horrid) does on NBC. Second, I’ve never really understood the whole Squirrel Girl thing. I get that she’s cutesy and all, but I’ve yet to read a comic where I’m like, “Wow! That Squirrel Girl!” Lately there’s been this movement to get Anna Kendrick cast as the character in the Marvel Cinematic Universe. Yeah, that’s nice and all, but I think that casting’s wrong. And there’s no way Kendrick is gonna do TV at this stage of her career. No, I think The Middle‘s Eden Sher is a much better choice. It was reported that she was having meetings with Marvel years ago, trying to figure out ways to get her into the MCU. Sadly, I think that ship might’ve sailed, as nobody expected The Middle to still be on at this point. At the moment, though, I’m hoping this project ends up with the same fate as Marvel’s Most Wanted. 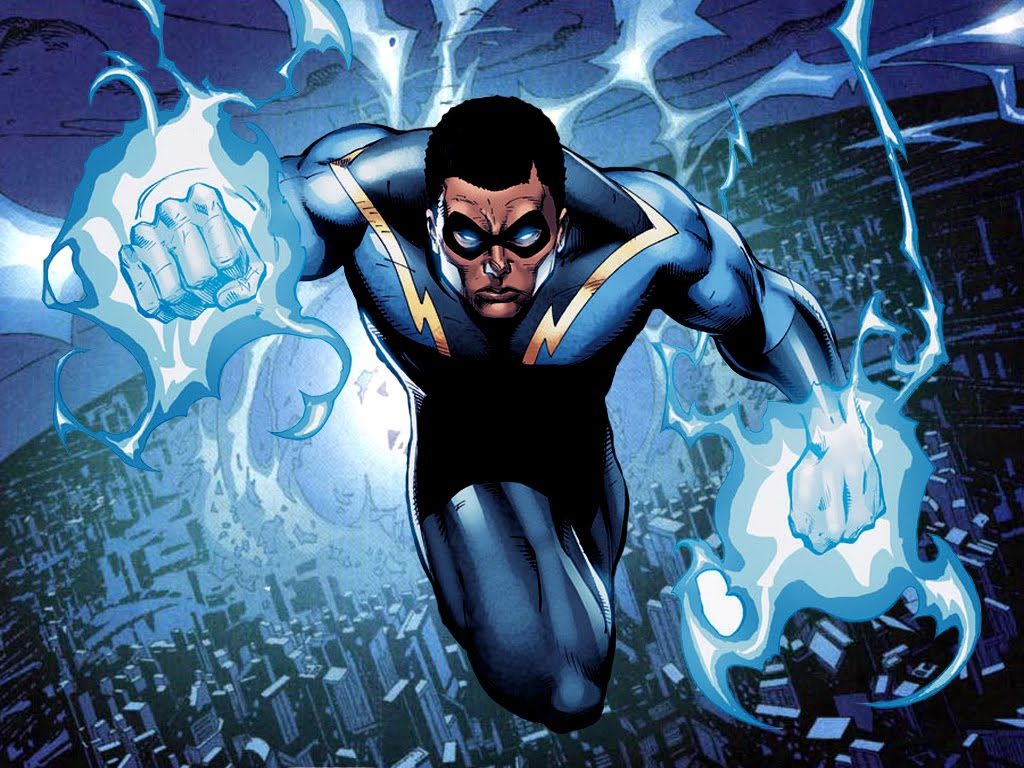 Meanwhile, in DC television world, Greg Berlanti is developing a Black Lightning show with the creators of Girlfriends/The Game, Mara Brock Akil and Salim Akil. I’m all for the Berlantiverse becoming more robust, but I always feel like the older shows suffer when he introduces a new one. I’d much rather they try to make Legends of Tomorrow a better show, and maybe add the character over there first. Black Lightning is an inner city teacher who has lightning powers, hailing from an age when all Black heroes had to have “Black” in their name. If this show gets off the ground, I’m sure it’ll end up being called something like Lightning. The funny thing is that he’s supposedly shopping it around to networks, like we all don’t already know it’s gonna end up on The CW.

You know what really grinds my gears? Country radio (yes, some of us still listen to the radio) does this thing where they play a new single from an album, and then they ask listeners to call in and tell them what they thought of the song. Supposedly, if the response is predominantly negative, the song won’t be played anymore. Um, THAT’S NOT HOW THE INDUSTRY WORKS! If a song has been released as an official single, they pretty much HAVE to play it. Radio doesn’t have the power to make or break an artist anymore. There are people selling albums and touring who’ve never even been on the radio. The days of “If I spin your record, it’ll make you a star” are over. So I guess I wish country stations would cut the shit and stop making the audience think they have some power they don’t really have. 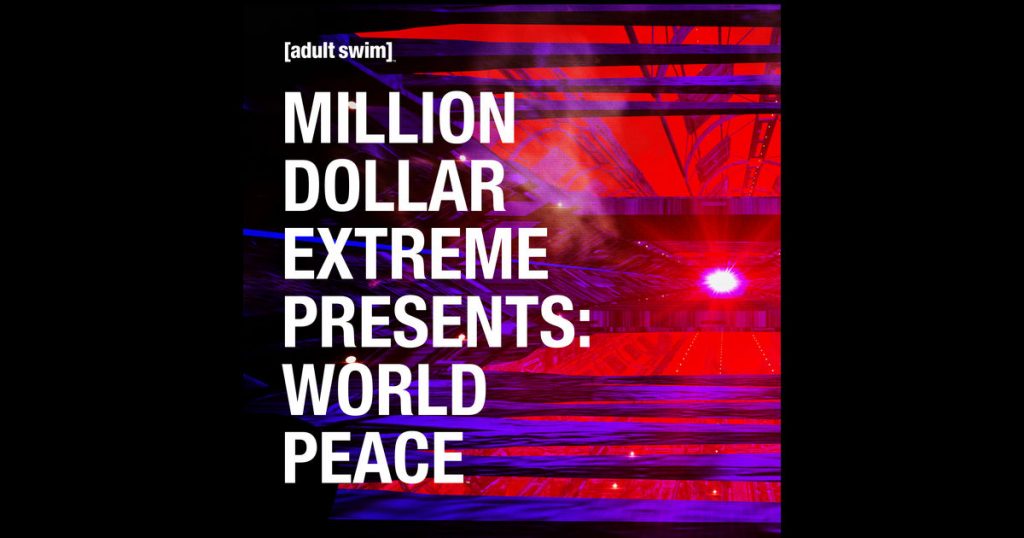 Another thing I don’t like? An Adult Swim show called Million Dollar Extreme Presents: World Peace. I’ve tweeted before about how I don’t really like the show, but last week I found I’d attracted the wrong attention: fans of the show. Now, first let me explain who’s behind it: Million Dollar Extreme is a sketch comedy group comprised of Sam Hyde, Charls Carroll, and Nick Rochefort who specialize in making you uncomfortable. Just Google Sam Hyde. I’ll wait. Especially look up his TED Talk. Basically they’ve made a name for themselves as part of the alt-right movement that despises political correctness. So, they go completely in the opposite direction. They do shit in blackface, they mock the handicapped. It’s pretty bad. So, last week, I tweeted this to a friend:

And then I went to sleep. When I woke up, a bunch of their fans had sarcastically favorited the tweet, and were replying to us, saying stuff like “Yeah, but you’ll watch it and LIKE it”. I looked at these folks’ profiles, and they are NOT nice people. I thought I was gonna end up doxxed or something. Anyway, bottom line: don’t watch World Peace. 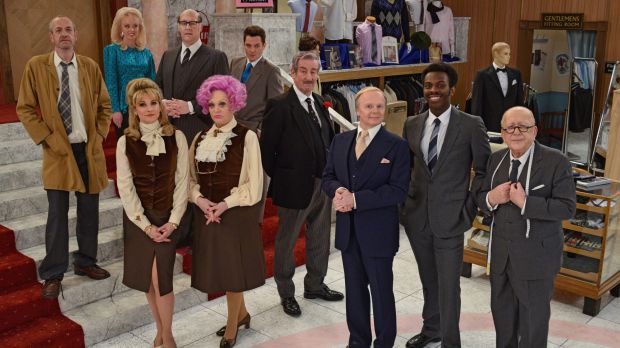 So, the only thing I really watched this week was the BBC Are You Being Served? special. Sure, it was a UK thing, but luckily I was able to find it on YouTube. I grew up watching the original show, so this was something that I HAD to see.

If you’re not familiar with it, Are You Being Served? was a Britcom set in a high end department store called Grace Brothers. The show particularly focused on the employees of the Men’s and Ladies’ departments, including Mr. Humphries, Mrs. Slocombe, and Captain Peacock. It had a very rigid class structure, where everyone was supposed to know their place and follow a certain chain of command. Captain Peacock was the snobbish “floor walker”, who kept everyone in line. Mr. Humphries was the butt of gay jokes because he was effeminate and lived with his mother. And Mrs. Slocombe was always talking about her pussy (Get your mind out of the gutter! It’s her cat!). The show ran for 13 years, but only has 70 episodes because, well, England. Once it ended, they even tried to “Golden Palace” it by moving the cast to a manor in which their pensions had been invested.

Anyway, in a celebration of British comedy, The BBC “revived” several shows by casting current actors in one-episode specials. This was especially necessary for AYBS?, seeing as how the entire cast is dead now (well, except for Mr. Spooner, but nobody gives a shit about him). Surprisingly, I didn’t know a single actor they cast in this thing. I always joke that there are only about 11 British actors, but I guess there are only 11 who’ve crossed over the pond. None of them, however, made it to this special. I felt the casting for everyone was pretty spot-on, though, especially Mr. Grainger and Mrs. Slocombe. I did, however, feel like they overdid it with Mr. Humphries. While he was effeminate in the original show, there was always a question of “Is he or isn’t he?” but here they just pretty much played him as humorously gay, which sort of took something away from the character.

When the episode starts, a young Black man named Richard Conway shows up for his first day as a member of the Men’s department staff. One thing I’m always curious about is race relations in other countries. While the episode was set in 1988, I was surprised that they never once referred to or joked about his race. Is this just not done in the UK? Or was it felt like that wasn’t the kind of humor you would expect from AYBS? I’d really love to know more about how they came to that decision, because an American show would’ve been ALL ABOUT the fact that he was this Black guy in a prim and proper establishment. It’d be called Homeboy In Knickers, and would air on UPN after Shasta McNasty.

Anyway, at the end of the day, it felt like a genuine “lost” episode of the show. It completely retconned the spinoff Grace & Favour, and it did some clever tinkering to get Mr. Grainger back in the mix. Basically 3 years have passed since the final episode, but things are pretty much like you remember them. There’s a Downton Abbey aspect to the show where it’s mired in class humor in a world that’s quickly changing. The crux of the episode is that the new Mr. Grace is determined to drag the store into the 20th century. It’s an interesting idea, and I’d actually love to see more of it. From what I’ve read, the special wasn’t well-received by the Brits, but I couldn’t have really asked for more. It didn’t swing for the fences by killing a major character, nor did it go for shock value. It tried to give you more of what you loved about the original show, and in that respect, I think it succeeded. That’s why the Are You Being Served? one-off special had the West Week Ever.