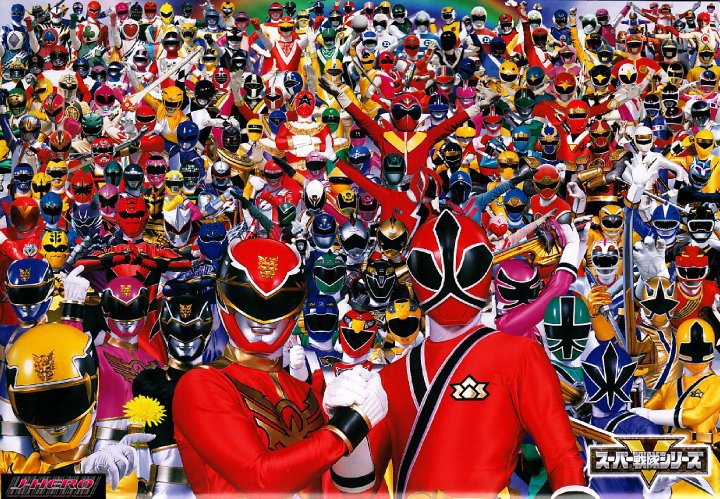 Every now and then, over the past 18 years, there have been certain points where I felt I had reached an age/level of “cool” where I probably shouldn’t bother with Power Rangers anymore. That said, you really can’t forget where you came from, so here I am talking about them again. While I don’t write about it often, I am a 29 year old Power Rangers fan. If you knew me growing up, you probably came to my house and saw my “shrine” of PR toys and collectibles. I know my love for Power Rangers isn’t natural, but it’s still there, and I’d like to try to explain why it exists.

Bouncing around the internet, I’ve found that I’m not alone in my love for the Power Rangers franchise. Allow me to say this, however: I’ve been involved in a LOT of fandoms over the course of my 29 years – from Trekkies to comic fanboys to a cappella nerds. Out of all of that, no one group scares me more than adult Power Rangers fans. This is probably why I don’t wear it on my sleeve like some. I’ve never posted on Rangerboard nor have I written fanfic to fill-in those missing years where Tommy apparently earned his PhD. I’ll admit that a part of me is probably jealous of their dedication. I mean, some of them track down the original Japanese shows and watch them with subtitles. Even yet, some learn Japanese just so they can watch *without* subtitles. A lot of what I’m mentioning could also be said about anime, but that’s still seen as this “fringe” thing, while we tend to think of PR as simply a “kids show”.

So, I can admit their dedication scares me. At the same time, they also tend to be some of the most socially awkward people I’ve encountered (and I worked in comics). A good example of this is the episode of MTV’s True Life which was called “I’m A Fanboy” (full disclosure: I actually applied for this episode, not even for Power Rangers, but for comics. After watching, I’m SO glad they didn’t deem me worthy). There, we met Jason, who was a 26 year old Power Rangers fan. I was so happy that I wasn’t alone! That is, until he met this sweet 16 year old at a convention, and then things got creepy. All of a sudden, he was trying to convince her to be his girlfriend, while she was telling him that she was too young and didn’t want to be tied down. You haven’t lived till you’ve seen a grown man get turned down by a geeky minor!

True Life: I’m a Fanboy from Punched in the Head Productions on Vimeo.

Sure, that’s just one scenario, but the point is that I haven’t seen many positive public depictions of adult PR fandom, so I’ve kinda kept it to myself, outside of a few tweets and the occasional blog post that I figure no one will read. They’re not all like him, though. as I’ve still got good friends from my Toys “R” Us days who enjoy a good Ranger conversation AND I don’t mind being seen in public with them!

Anyway, I find my interest in PR spikes whenever a new series is about to premiere. It’s like when your girlfriend gets new clothes, and you suddenly think, “Where have YOU been hiding?!” I tend to lose my connection with the franchise, but I always find my way back. It wasn’t always like this, though. Back in the early days of the internet, I believe I was one of the foremost PR experts in my age category. Yes, I’m audacious enough to say that. I mean, I was already on the cusp of being too old for it when it began, so I had this adolescent obsession driving me to learn more. I dunno. I remember I used a LOT of my school’s paper supply to print out anything and everything I could find about Power Rangers. I still have binders filled with printouts of old Geocities and Xanga sites. What can I say? When I get into something, I tend to go ALL IN.

Through all of this breaking of the ice, however, we still haven’t covered the “why” of my PR obsession. Mainly, and I’m not ashamed to say this, I like bad television. Sure, you’ve got your TV snobs who lament the loss of Arrested Development and Sports Night but that’s not me. I enjoy guilty pleasure TV. Hell, if Baywatch Nights was still on, I’d still be watching. I’m still waiting for Team Knight Rider to come out on DVD. I’m not looking for Shakespeare – I just like good escapist television. That’s what Power Rangers was in the beginning. Over time, however, the story actually got…good. Most people gave up after early Mighty Morphin’, so they wouldn’t know about this.

(As an aside, I’m a bit of snob when it comes to my hobbies. With comics, if you tell me that you love Batman, I’ll ask you “Who killed Bruce Wayne’s parents?” If you answer “the Joker”, we have nothing else to discuss. The same could be said about PR. If I mention Power Rangers, and all you can say is “Man, it was messed up how the black guy was the BLACK RANGER!”, I already know the extent of your Ranger knowledge.)

Anyway, for those of us who held on, the storylines got really good. Power Rangers in Space was more suspenseful and dark than many primetime dramas. Power Rangers RPM was set in a post-apocalyptic world, where most of humanity had been destroyed by a computer virus – and that shit was from Disney! Anyway, I guess you could say that I came for the schlock, but I stayed for the story.

I made a promise to myself that I would keep watching Power Rangers as long as they kept making it. I mean, who knew it would last this long?! As time went on, internet connections got faster, I went off to college, Power Rangers moved to cable, and my obsession somewhat waned as other fans began to outpace me. I was raised, however, to never make a promise that you can’t keep – for this reason, I don’t make many promises. I had made that Power Rangers promise, so I had to make good on it.

In college, do you know how hard it was to watch Power Rangers?! Kicking drunks out of the Common Room on a Saturday morning so that I could watch Lightspeed Rescue? Being laughed at by the Walk of Shame strumpets?! I held on, though, til Saban sold the franchise, along with the rest of Fox Kids, to Disney. Not only was it harder to find on the air (ABC affiliates tended to air it at odd hours), but Buena Vista TV had a mad on for going after piracy, so links were taken down almost immediately. As far as I was concerned, I had upheld my end of the promise: I was trying to watch, but Disney was thwarting me. So, I took a few years away from Power Rangers. Sure, I checked in when I could (how the Hell did Tommy ever become a doctor?!), but there are some incarnations that I’ve never even seen (I’m sorry, but Mystic Force just sounded dumb).

As for the toys and memorabilia, it really comes down to the fact that I’m a speculator. Sure, there’s no baseball card market anymore, and comics are just glorified toilet paper, but I didn’t know any better growing up. As far as I was concerned, I was gonna be a fucking Rockefeller in the world of collectibles. I jumped on every bandwagon that came along, and Power Rangers was no different. To be perfectly honest, I was like most of you in the beginning. I thought the first episode was kinda lame (“Day of the Dumpster” was dated even by 1993 standards), but I had seen some of the toy ads in the Fox Kids Magazine, and thought they looked kinda cool. Little did I know that they would reach Cabbage Patch/Tickle Me Elmo heights of popularity. They were THE toy of Christmas 1993, and my mom, for all of her fretting and evangelical ways, has always supported my pursuit of hard-to-find stuff. So, I got my first batch of Power Rangers toys as “an investment”. She made me keep all the boxes, since they might become “collectors’ items”. Over time, though, speculating gave way to sheer enjoyment. If you’ve ever enjoyed playing with Transformers, then you’d enjoy playing with Zords. It’s pretty much the same thing. Eventually, however, my collecting got out of control. I finally weened myself off of the toys once I went to college, but that doesn’t change the fact that I still have a shit-ton of Saban-era Power Rangers toys. And all their original boxes.

So, what’s the reason for this trip down memory lane? Well, as I mentioned, my interest spikes when the debut of a new Ranger series is upon us. Next Monday, Power Rangers Samurai makes its debut on Nickelodeon. When I first heard that Haim Saban had bought the franchise back from Disney, I felt that he was really just going to sit on it for the licensing money. Instead, it seems like he’s really putting a lot of effort into Samurai. It’s being heralded as a back-to-basics approach, as he has gotten the old band back together on the production side. Plus, not only is the theme a remixed version of the original “Go Go Power Rangers”, but they’ve even got Bulk back for comic relief! While young kids may just see it as a fun action-packed show, it’s really almost a homecoming for those of us who remember the early days of the franchise. Something that really should’ve been a flash-in-the pan fad has become something of a multigenerational franchise. It has reached that age where parents are watching with their kids, saying “I used to watch this when I was little”. Whether you like the show or not, that’s still an accomplishment worthy of applause. There doesn’t seem to be an end in sight, as Japan is still cranking out the source material.  Anyway, I’ve spent a LOT of time and money on what most people consider to be “a dumb kids show”, but I’ve gotta say…I’m kinda starting to look forward to the day when I share it with my kids.

One thought on “My History with the Power Rangers”