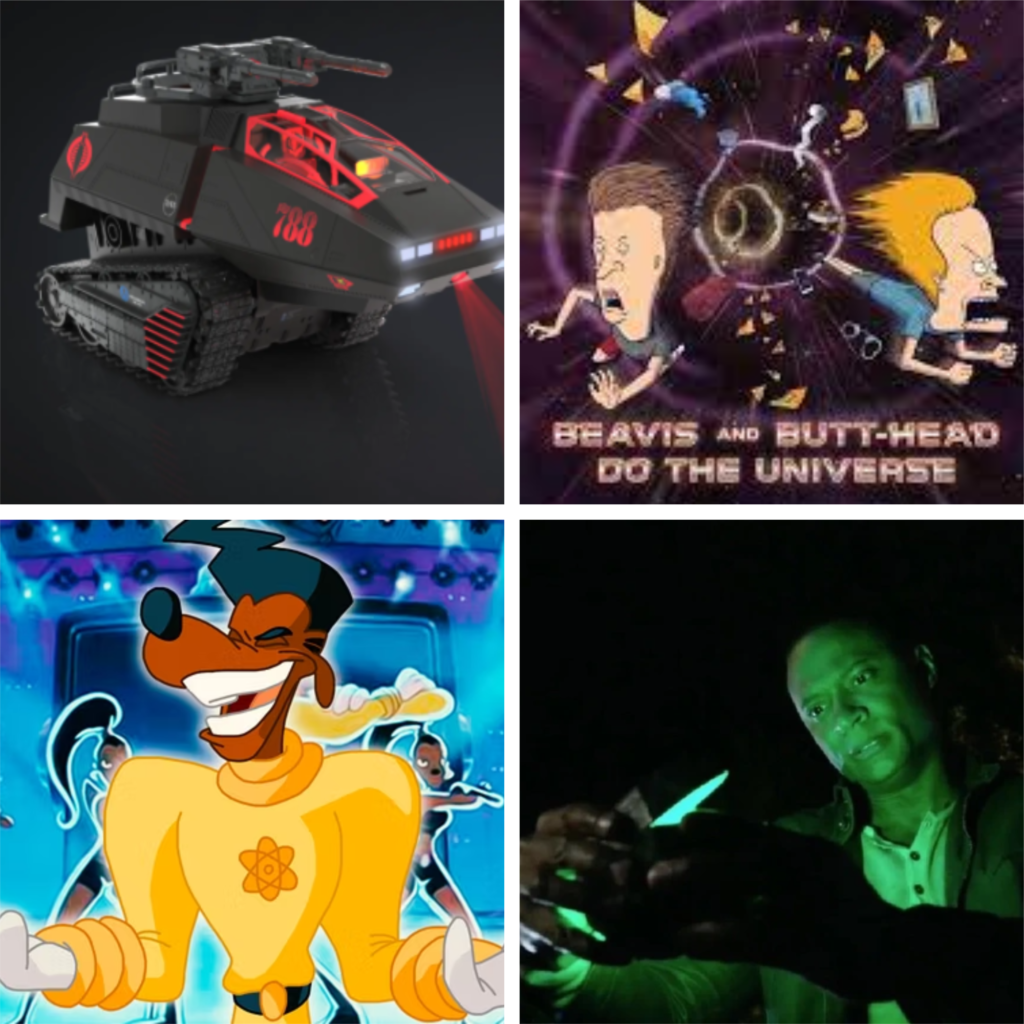 I’m still locked out of the Disney+ account, but that didn’t stop me from firing up the Paramount+! 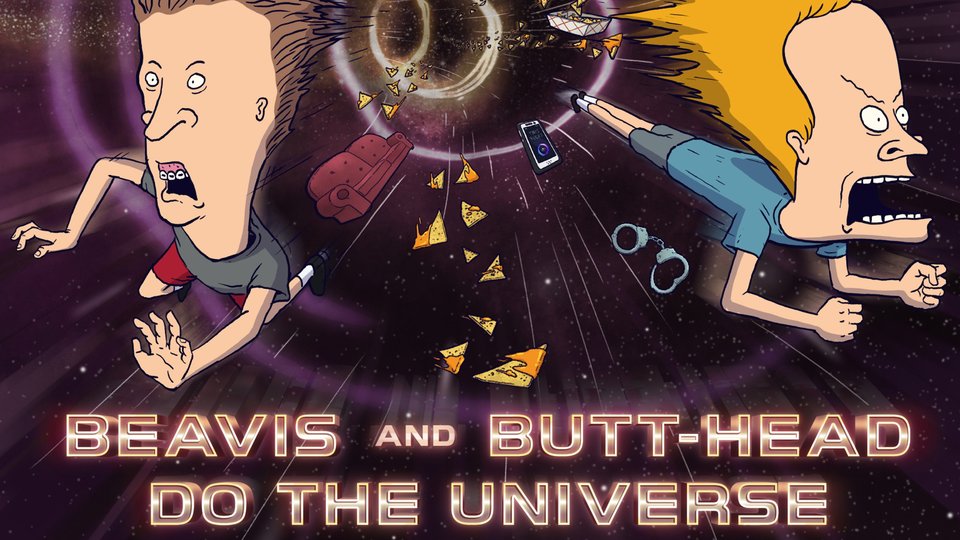 First up, I watched Beavis and Butthead Do The Universe, which is funny because I distinctly remember saying that I wouldn’t be watching it on the day of release, which is exactly what I did. I’m glad to say that everything I thought about the trailer was wrong, and the movie was HILARIOUS. As I’ve said before, I didn’t grow up with cable, so I wasn’t really able to be a Beavis superfan, but I knew enough about the franchise, and I’d seen the first movie. That said, I was going into this with very little excitement, and I found myself pleasantly surprised.

Long story short, Beavis and Butthead are trying to get laid and find themselves on a time & space-bending road trip. It’s funny to see them interact with modern technology, or learn about new societal concepts, like White Privilege. Also, what is it about road trip movies that the characters have to end up in jail for a stint? Where did that trope come from? Anyway, I applaud the fact that it probably would have been easy for Mike Judge to have “gone Rick & Morty” with it, but I didn’t feel like that show inspired anything about this movie until the very last scene. No, this is decidedly a Beavis and Butthead project, and based on how it ends, I hope we get more of this down the road. 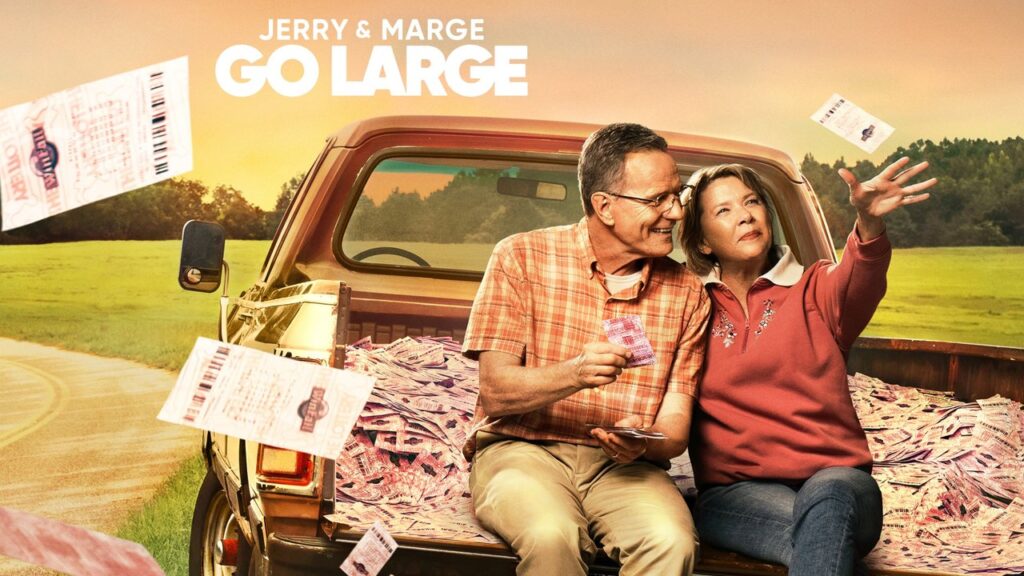 Next up, I watched Jerry & Marge Go Large, starring Bryan Cranston and Annette Bening as a retired couple who figure out how to game the state lottery system. They really don’t make movies like this anymore, as it felt like a heartwarming 90s family film. You see, once they start winning, Jerry and Marge don’t waste it all on hookers and blow. No, instead they invest in their small town to help revitalize some of the business that had been shuttered recently. Their windfall becomes the town’s windfall, and everything is great until some evil Harvard kids figure out the same lottery flaw and start trying to push Jerry out of the picture. Cranston is great, as always, and I can’t remember the last time I’d seen Bening in anything.

Side Note: You know how Morgan Freeman was clearly bitten by a vampire at the age of 58, and hasn’t aged past that in 30 years? I feel like Cranston is the opposite. I blinked and the next thing I knew, he was 65 years old. I know he was no spring chicken in Breaking Bad, but it’s like he became a retiree overnight!

Anyway, I highly recommend this film for a relaxing Sunday afternoon watch, and it’s not long, either!

After two and a half years, The Flash finally resolved a plotline left dangling from the Arrow series finale, and boy did it suck! You see, in the final moments of Arrow‘s finale, Oliver Queen’s bodyguard/right hand man John Diggle is packing up to move his family to Metropolis, when a meteor crashes nearby. Diggle goes to investigate and finds a mysterious box with a green glow. When Diggle opens the box, the audience doesn’t see what’s inside, but it’s so powerful that it blasts him into the side of his moving van. there had been years of fan theories that Diggle would become a Green Lantern, a la John Stewart, mainly because they’re both Black and fanboys ironically lack imagination at times.

Over the next 2 years, Diggle would pop up on the various remaining Arrowverse shows, trying to solve the mystery of the box. Why was it calling to him? Why couldn’t he open it again? Well, I randomly happened to catch an episode of The Flash 3 weeks ago where he popped up and confronted whatever character Tom Cavanagh was playing that week (Seriously, does he have a blood oath with one of the producers? Are they trying to help him out with gambling debt?), and he managed to get the box open again. He could hear the voices of the cosmos calling to him, and he would be granted immeasurable power. All sounds great, right? Well, turns out all the travel and whatnot had caused Diggle to miss his family. And he decided that there was nothing the box could offer him that would surpass the love that he has for his family *groan*. So, he declined the box’s offer, and it dematerialized right in front of him. So all that work, all those cameos…all for nothing. Oh, and those appearances on Superman & Lois don’t even count because ***SPOILERS*** it was revealed this week that the show takes places on a different Earth from the rest of the Arrowverse, so anytime you saw Diggle on there, it was a different Diggle. Womp womp.

I know The CW is supposed to be working on a series called Justice U, which would feature Diggle training young heroes, but with the way they’re canceling series left and right, I really doubt that thing is ever getting made. It’s a shame because I’ve never felt that they quite knew what to do with Diggle. He and Oliver got into a great rhythm, but once the Green Lantern rumors started, and they put him in the field as Spartan, his purpose just got sort of muddied. Oh, and it’s not lost on me that he gave up the box for his family, when his wife – A.R.G.U.S. agent “Harbinger” – would have taken that box without even thinking twice. I guess that makes him a better person, but she would have understood the greater good. To draw this out for nearly 3 years, with this kind of “resolution” is just more evidence as to the fact that the Arrowverse has overstayed its welcome. 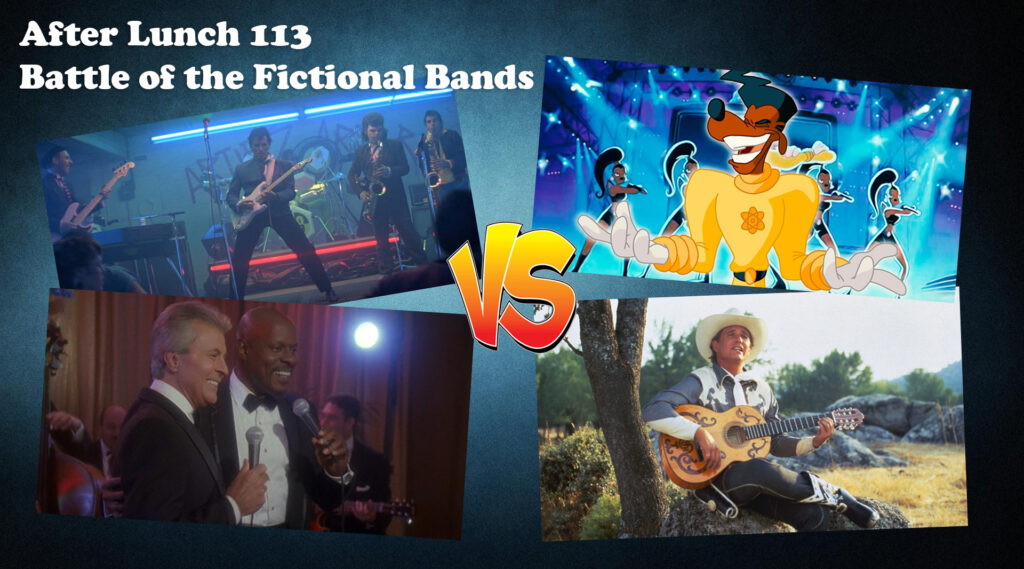 I had the honor and pleasure of joining the After Lunch Podcast to determine the greatest *fictional* band or musician. Of course I didn’t win, but I played to my strengths, and was true to my brand. You should definitely check it out, as it was a great time, and we even got Nerd Lunch’s CT to come out of retirement!

Yeah, I’m a few weeks late on this one, but I still had thoughts. To be honest, I never thought this was ever getting made. I mean, Dwayne Johnson signed onto this role over a decade ago. His contract is older than my kids! The thing that never made sense to me, though, is the fact that Black Adam is, for all intents and purposes, a villain, yet there was no one in Hollywood with the charisma to go toe to toe with him in the hero role. It sure as Hell ain’t Zachary Levi, who was cast as Adam’s foe, Captain Marvel (SHAZAM), years after Johnson was announced. I mean, they’re eventually going to have to meet up and fight, right? The problem there is that the audience is not going to root for Levi, and that throws the whole dynamic out of whack. If it were Marvel, I’d just say “Trust the process”, but Warner Bros has shown time and again that they have no clue what they’re doing with their superhero slate. I mean, they can’t even manage to hire an assassin to take out Ezra Miller!

I love EVERYTHING about this! I am a HUGE Damian Wayne fan who feels that the character is often misunderstood. Some of his best stories are ones that remind you he’s still a kid, lost in the shadow of his great father. Meanwhile, the introduction of Jon Kent could have been a real misfire, but pairing him up with Damian resulted in some of my favorite DC stories of the New 52 era. I always kind of dislike the DC animated movies, as they seem married to the 80-minute runtime, which doesn’t always allow the stories to breathe. Still, I’m more excited for this than I have been for a DC project in a long time, so I will be slamming down my money to buy this on Day One.

Lately, the name of toy company Hasbro has been something of a four-letter word, but not this week! You see, they have a crowdfunded component, called HasLab, where fans can pledge to buy higher end items that typically wouldn’t work in a retail setting. These are larger, more expensive items than what you’re used to finding in stores, but these are geared towards the “adult collector” market, so direct to consumer is a better business model for these. All this month, while everyone else was celebrating Pride, Hasbro was celebrating Yo Joe June, in commemoration of the 40th anniversary of G.I. Joe: A Real American Hero. Every week, the marketing folks revealed new upcoming products, and this week they revealed the first HasLab item for the 6″ G.I. Joe Classified toyline: The Cobra H.I.S.S. Tank. 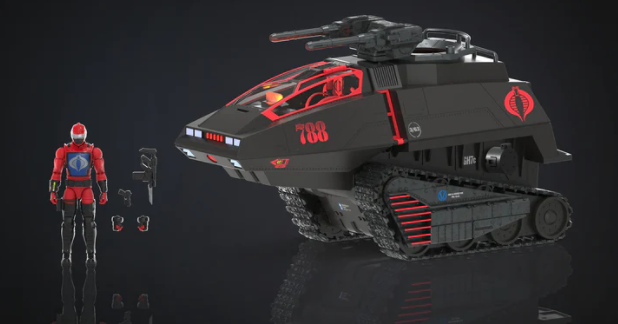 Priced at $299.99, the Cobra H.I.S.S. Tank is designed to accommodate a minimum of three 6″ figures (driver, gunner, rear office), and it comes with the driver figure. Hasbro included a perk to stimulate pledges: If the H.I.S.S. had 8,000 preorders within the first week, then it would also come with the Cobra H.I.S.S. Tactician figure. Well, those were the magic words, as the project was FULLY FUNDED in a matter of hours, which was surely a HasLab record! Since Wednesday, Hasbro has revealed 2 more stretch goal tiers, including side-mounted missile launchers and an optional, clear canopy. As of the time of this post, the project stands at 11,353 backers. There are some rumblings that the fan community is just goosing the numbers with orders that they plan to cancel once Hasbro has revealed all of the tier rewards, but I guess time will tell on whether that is actually the case.

The Joe fan community seems very excited for this item, which is quite a feat (they tend to hate everything!), so for that alone, the Cobra H.I.S.S. Tank had the West Week Ever.