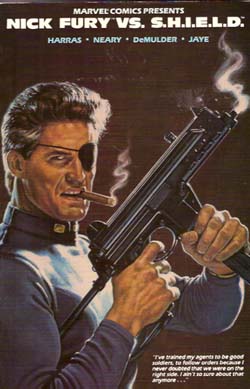 In light of recent events in Captain America: The Winter Soldier, as well as Marvel’s Agents of S.H.I.E.L.D., I figured it’d be a good time to finally read this tale. Upon reading it, it’s clear that it was more of an inspiration for The Winter Soldier than the actual Winter Soldier storyline. As it’s a miniseries from the 80s, it predates the debut of the Winter Soldier by about twenty years, but that doesn’t change things. Nick Fury discovers that S.H.I.E.L.D. has been infiltrated, and he goes on the run as an enemy of the state. Sound familiar? Lets take a closer look.

When the story starts, Fury and other S.H.I.E.L.D. agents are trying to recover the nuclear power core from the recently destroyed helicarrier. The minute it seems like the core is secure, A.I.M. and Hydra attack and steal the core. Thanks to a well-placed deep cover agent, Fury discovers that the core is actually in the possession of the evil Roxxon Corporation. When he reports back to his superiors, they cut him off and say they’ll look into it. Next thing Fury knows, The Council is saying that there’s no evidence against Roxxon, and it appears his deep cover agent has been brainwashed. Suddenly, Fury is wanted for treason, and is forced to go on the run from his own organization.

While Fury’s on the run, we find out that people aren’t who they say they are, as several S.H.I.E.L.D. agents have been replaced by clones. Jasper Sitwell is placed in charge of S.H.I.E.L.D. and he leads the search for Fury. Sitwell meets with both Avengers teams, as well as the Fantastic Four, and warns them not to aid Fury. With no heroes to turn to, Fury is forced to turn to deep cover agent Alexander Pierce. Unlike in The Winter Soldier, Pierce is not Fury’s boss, but rather another sleeper agent who’s a little rusty since he’s been out of the game for a while. While escaping several ambushes, Fury and Pierce piece together a ragtag group that includes Al McKenzie, the CIA liaison to S.H.I.E.L.D., as well as an incarnation of Madame Hydra – all in an attempt to figure out what’s been going on with S.H.I.E.L.D.  Here’s where the similarities end, and the third act gets kinda weird.

The person behind the whole S.H.I.E.L.D. infiltration was a Life Model Decoy (LMD) that gained a sense of independence. It was originally designed to maintain areas that were too dangerous for human agents, and it increased its objective to be on a global scale. Instead of maintaining S.H.I.E.L.D.’s systems, it sought to maintain humanity. In order to do this, the LMD worked its way through S.H.I.E.L.D., replacing key people with Deltites – flesh and blood clones with malleable personalities. This expanded into almost a game, as the LMD eventually controlled S.H.I.E.L.D., A.I.M., Hydra, Roxxon, and The Council. Deltites would help him assert control over humanity, but there was a problem: the Deltites decayed at a rapid rate, so the clones kept having to be recreated. Like copying a tape, the further you got away from the source, the worse the copy. So, the only way to make sure the Deltites didn’t decay was to infuse them with the Infinity Formula that keeps Fury from aging.

There’s a whole bunch of other craziness, like the LMD created a false religion and disciples in order to serve the Deltites, and Hydra kills a village of a couple thousand people. In the end, S.H.I.E.L.D. is ordered to disband.

So, in Captain America: The Winter Soldier, both Nick Fury and Captain America share the comic Fury role. Both were betrayed by S.H.I.E.L.D. and both go on the run. In the movie, it makes more sense that the agency would be infiltrated by Hydra rather than by an LMD – a concept that hasn’t even been introduced in the Marvel Cinematic Universe at this time. Sitwell finds himself on the wrong side of history, and both stories end with S.H.I.E.L.D. being dismantled.

At this point, I’m not even sure this miniseries is considered canon. A lot of the S.H.I.E.L.D. agents who were replaced by Deltites are still around, even though they were supposedly killed when the switch took place. Clay Quartermain, Jimmy Woo, and Jasper Sitwell are all key agents who were killed in the story, yet there’s been no mention of it since.

So, do I recommend this story? Sure. If you’re like me, and you’ve always been curious about how S.H.I.E.L.D. operates, it’s a really interesting story. It even references the Academy, which I didn’t even know existed until it was featured on Agents of S.H.I.E.L.D.  The first two acts are suspenseful in the same vein as The Winter Soldier, and it’s just unfortunate that the final act is bogged down with an exploration of what it means to be human and to have a soul. It really kills the suspenseful mood, and I don’t feel like it stuck the landing. Still, if you’re looking for a comic that mostly feels like The Winter Soldier, this is a good place to start.