Can I just take a minute to saw how much I love that real life is gradually evolving into my vision for Thrift Justice: The Series? I mean, I’m not a bounty hunter (yet), but Special Forces has become a full fledged sidekick, just as I envisioned. Anyway, last weekend’s haul wasn’t huge, but it’s about quality and not quantity! 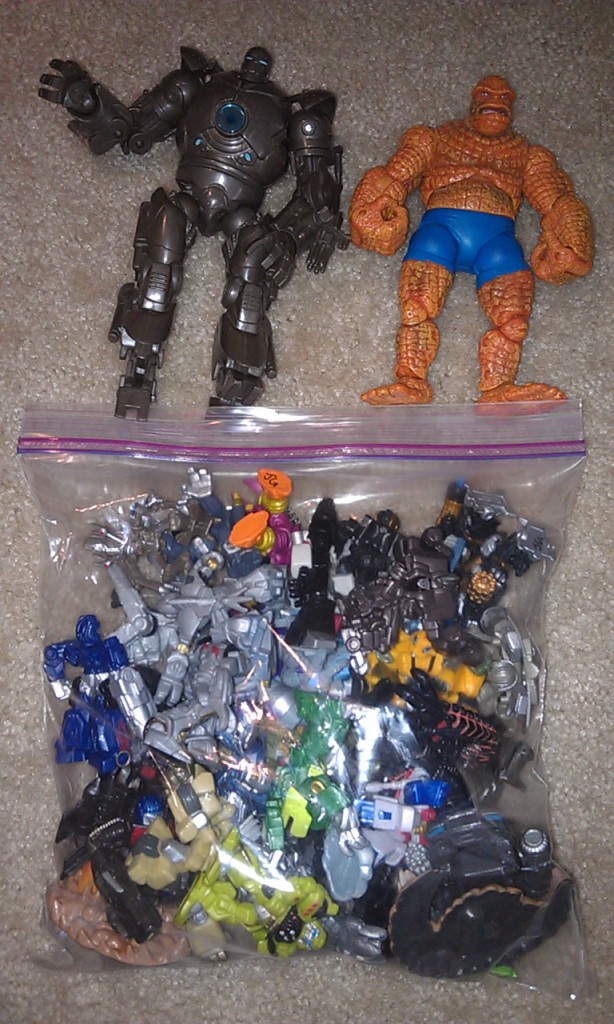 It was supposed to rain Saturday, so I made a point to look for sales that labeled themselves as “rain or shine”. Luckily, the clouds held it together long enough for us to hit a few choice sales first thing that morning. I’ve always tried not to be an “early bird”, as a lot of sellers hate that. So, when I arrive early to a sale, I just hang out in my car, looking like a sketchy black guy in a white neighborhood. It’s all very hilarious to the people living on that street. Anyway, we did this on Saturday, and missed out big time, as another guy pulled up who didn’t care about being an early bird. At first, I thought he lived there, seeing as how he bounded the steps with ease and familiarity. Then, I saw him walk to his car with a stack of books in his hands about a foot and a half high. I’m not exaggerating. SF and I were trying to figure out if they were graphic novels. I decided it was time to hit the sale, and we jumped out of my car and up the steps. It turns out those were all LEGO manuals, to accompany the $100 of LEGO he had just purchased. And there had to have been a good 70 lbs! Do you know what that would get on the secondary market?!! Feeling deflated, I managed to get the figures you see above. She had a bunch of Marvel Universe figures, but wanted $1 each, and I just felt that was too much. I’m sorry, but I like $0.50 for my used 4″ figures. Thing and Iron Monger were $1 each, which was fair. IM is broken, as his slam action no longer works, but he’s still a good looking figure. Plus, I got a bag of Transformers Robot Heroes for $5. 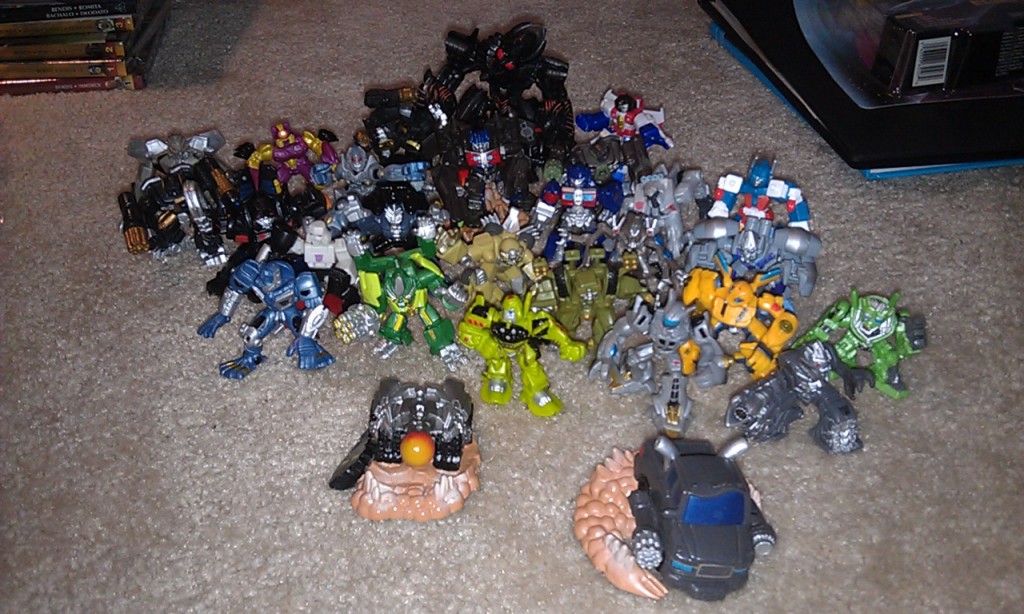 Here’s a closer look at the Robot Heroes. I haven’t counted them yet, but there are well over 25 of them. A lot of them also have the kid’s initials written on their foot – ya know, to distinguish them at play dates. This was an OK haul, but I wanted those friggin’ tubs of LEGO!!! 🙁 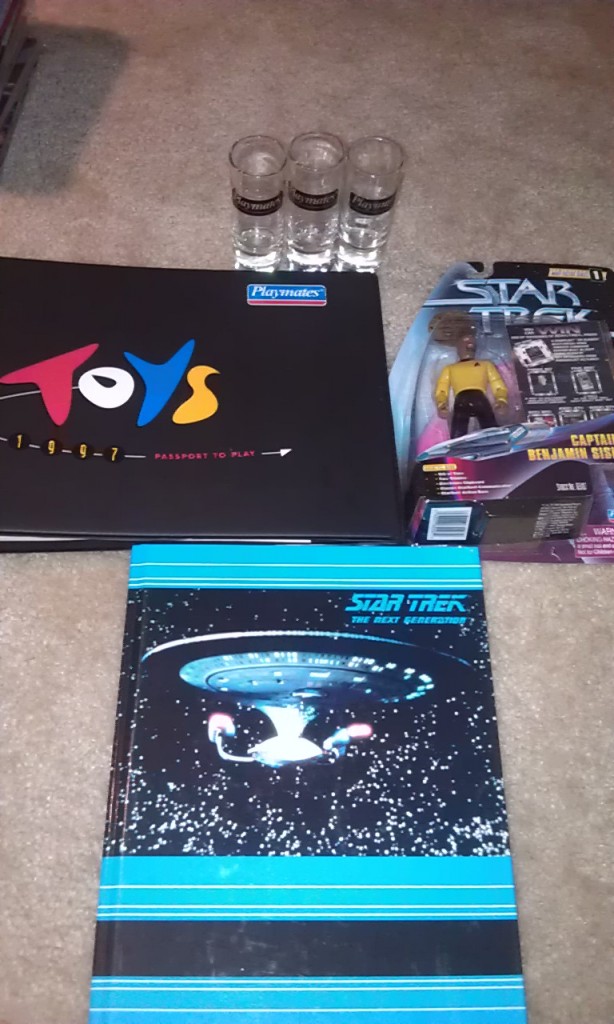 While I was looking at the Marvel figures, a woman from down the street ran up, and saleblocked her neighbor by telling us that she was also having a sale, and that we needed to come by and look. Well, who am I to pass up a forward older woman? Once we got to the sale, I noticed it was mainly National Geographic memorabilia. Then, I noticed a few Star Trek trinkets. Once the other seller at the house (don’t know if they were sisters, partners, what) asked, “Am I gonna have to get out my Star Trek stuff?” I said, “Yeah, I think you are!” She went into the house, and brought out several boxes of carded Star Trek figures from the Playmates era. As nice as the figures were, she mentioned something that caught my interest: she had gone to Toy Fair in ’97, and had received the Playmates catalog, as well as 3 shooter glasses. THAT was what I wanted. After all, my love of toy industry catalogs has already been documented. I’d promise to showcase what’s inside, but I’ve made that promise in the past, and I never make good on it. One day? One day. Anyway, the TNG hardcover is really just a notebook, but I kinda liked it, so grabbed it, too. Finally, I got the “Trials & Tribble-ations” Captain Sisko figure. I already have all the T&T figures, but I didn’t have any carded. I’m trying to bolster my carded figure collection, and I figure I should probably “keep it in the community” by buying the black guy. So, I got all of this for $20, which I don’t think was too bad. I’ll probably sell off the shooters and make some of it back. 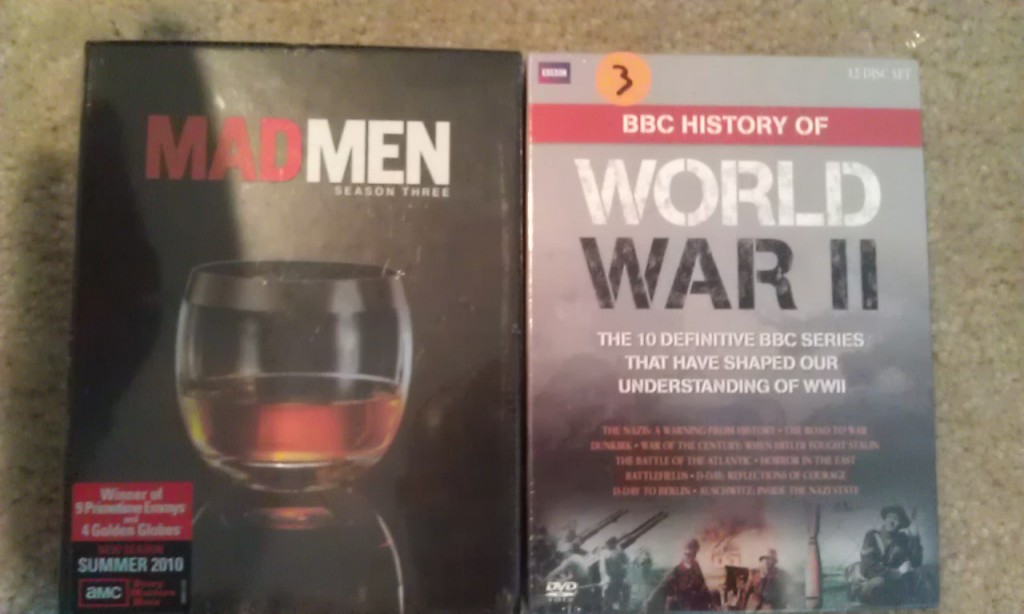 At one of the last houses, I got this sealed Mad Men Season 3 for $2!!! Sealed. Needless to say, it’s listed on Amazon as we speak. Finally, at the last house we hit, they were selling a lot of World War II DVDs and whatnot. Again, I have an affinity for sealed DVDs, as well as things from the BBC. In case you weren’t aware, BBC DVDs cost an arm & a leg, just like TV season sets of HBO shows. Regardless, I don’t know any war buffs, so I walked away from the $3 price tag. As SF & I were walking to the car, something told me to check the going prices on Amazon. $65?! Needless to say, I turned right around, and gladly handed over $3. At this point, the clouds let loose their fury, and we decided to spend the rest of the morning in thrift stores.

Luckily, Special Forces and I don’t like the same things. I’m the toy guy, while he’s the video game guy. Since we don’t “cross the streams”, we make a good pair. Anyway, here’s what he got: 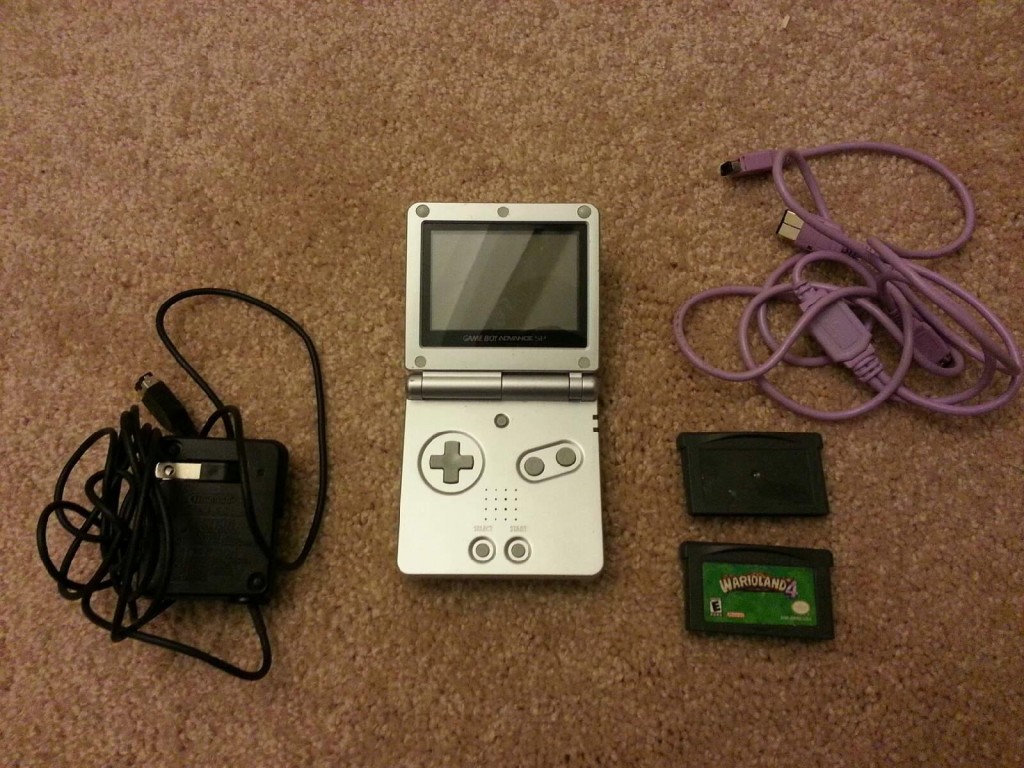 At the sale where I got the Mad Men set, SF got all of this for $8. He thought the tag said $18, but I swore that it was $8. After asking the woman of the house, it was confirmed at $8. While the system was nice, I think SF was more intrigued by the “mystery” game you see above Warioland 4. Remind me to ask him what that turned out to be (or just tell us in the comments, SF!). 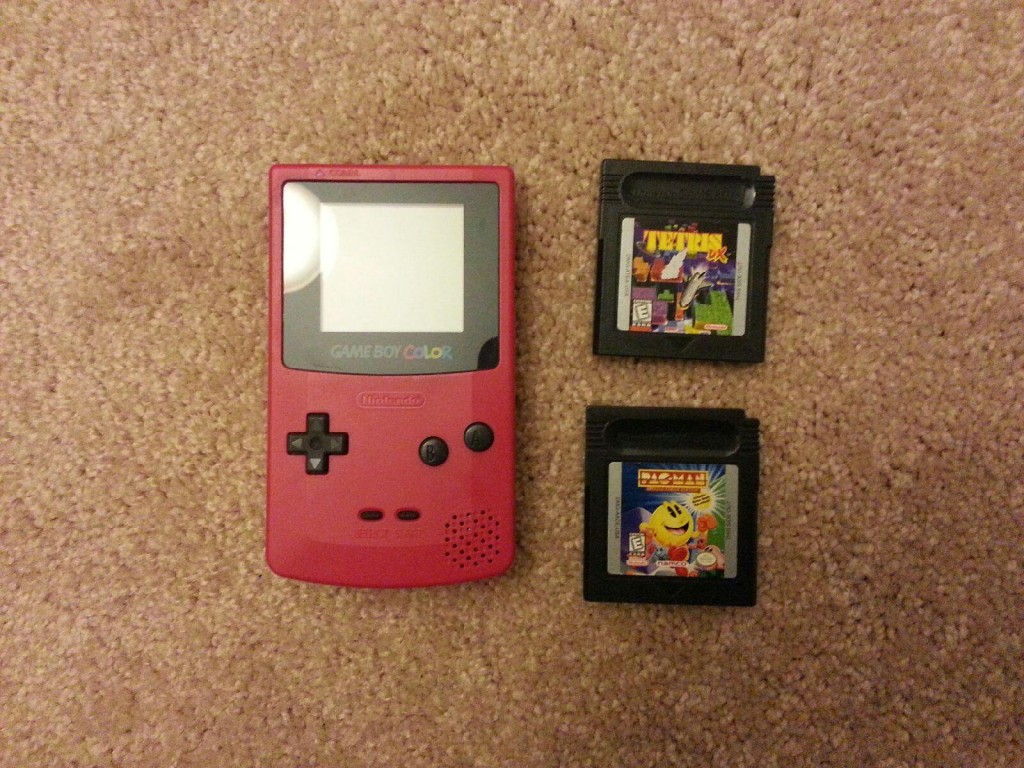 Since video game pickings are sometimes slim at yard sales, SF typically does better at the after-sale thrift store rounds that we make. He got this at thrift store #3 (yup, we roll that hard) because it’s apparently a rare color. It seems the clear/clear purple are common, but this fuschia is a bit more rare. I guess those games were packaged with it. 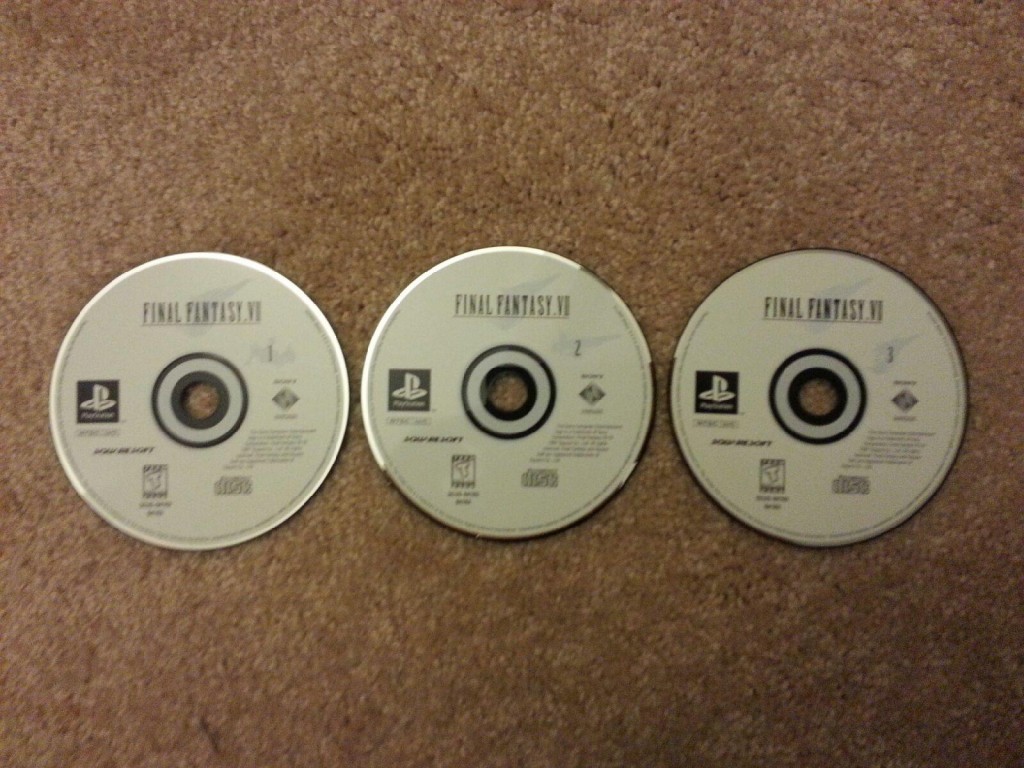 Finally, he grabbed this 3-disc Final Fantasy (can’t tell if it’s 6 or 7) for about $2. He tells me this is the first edition, and not the Greatest Hits version, making it more sought after. He’s the game guy, so I bow to his expertise.

So, there ya have it – another one for the books…and the net. Later this week, I think I’ll treat y’all to a traditional edition of Thrift Justice. Stay tuned!