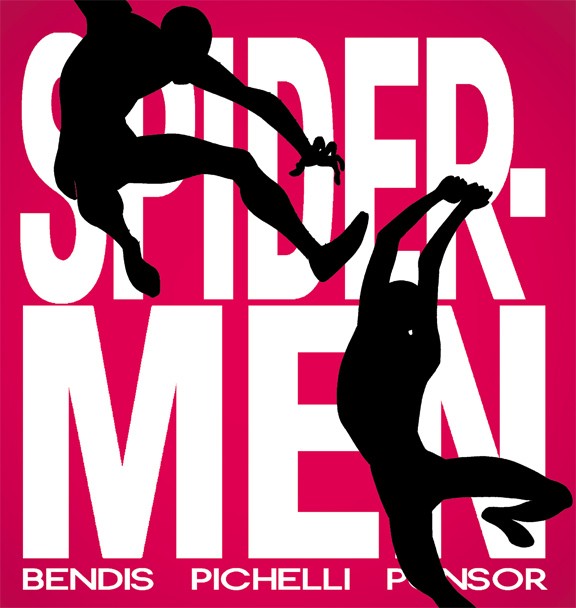 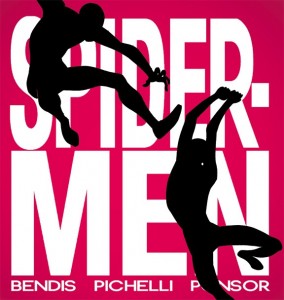 So, a few months ago, I wrote this article over on The Robot’s Pajamas. Go ahead and read it if you haven’t; I’ll wait. Don’t have the time? OK, I’ll break it down for you. Amidst much controversy, Marvel killed Spider-Man Peter Parker in the Ultimate Universe and replaced him with Miles Morales. As you can imagine from comic circles, this caused fanboys to lose their shit. We’re talking wall to wall diarrhea here! Frankly, I didn’t care what they thought. First off, it was a “safe” move, since the Ultimate Universe isn’t the REAL Marvel Universe. Second, I think Miles is a great character, who can breathe new life into what had become a stale copy of everything that had already occurred in the “real” Marvel U.

Why am I bringing this up today? Well, Marvel officially announced the details of Spider-Men, a series they’d teased but hadn’t fully explained. This summer, both universes will cross over, as Miles Morales will get to meet Peter Parker. Back when the Ultimate Universe was created, former Editor-In-Chief Joe Quesada swore that the two universes would never cross over. In fact, he said something akin to the fact that such a thing would only occur after they had completely run out of ideas. This morning, everyone online is trying to remind him of this sentiment. First off, Quesada has gone back on a LOT of his 10 year old promises. I’m pretty sure he never thought he’d have the job as long as he did, so these things happen. Also, I don’t think this is the same scenario he was discussing. Spider-Men, while controversial, isn’t such a bad idea after all.

Miles Morales is a bit green behind the ears, and he needs someone to train him. Sure, Peter had The Ultimates training him, but look how that turned out (SPOILER: he dead). Sure, The Ultimates never really got started with their training, but the fact of the matter is that Miles could learn much more from someone who’s been in his shoes rather than an outsider who doesn’t truly understand his powers.

As I write this, someone is telling me that Miles can never be THE Spider-Man if he interacts with Peter Parker. I don’t see how that’s relevant. Miles interacting with Peter just gives him another perspective on his powers and of what he can become. A similar thing happened with Ultimate Reed Richards. As the first Ultimate crossover with another Marvel Universe, the Ultimate Fantastic Four characters interacted with the characters from the Marvel Zombies universe. The events of this continue to affect Ultimate Reed Richards to this day. Learning about other universes changed his perspective, and gave him a new understanding of what he could become. Some people may not like the current state of Ult Richards (Spoiler: he bad), but the event certainly helped to shape him into something vastly different from his “regular” incarnation.

Miles needs to see a successful, grown Spider-Man in action. As it stands, the Ultimate Universe’s idea of Spider-Man isn’t the best. Sure, he died a hero, but he’s also the poster child for reckless youth. He was untrained and that lack of training got him killed. Miles just got his powers and isn’t too sure of himself. He’s studying Peter’s moves via YouTube videos, but he needs more. Not to borrow from the headlines, but this sort of interaction with the “regular” Peter Parker could serve as Miles’s “It Gets Better”. It would show him that he won’t always be the novice, but could one day successfully get the hang of things.

Comics are full of gimmicks these days, and Marvel tends to be the one doling out most of them. It’s easy to rail against things that go against the norm, but I think this storyline could be a good thing. Plus, I find that most of the people who hated the idea are the same who hated Miles to begin with, for whatever reason. I have GREATLY enjoyed the new direction of Ultimate Spider-Man – not because he’s a minority character, but because his addition breathed life into a property that had been stagnant for quite some time. Anyone following the Ultimate Universe knows that it was pretty obvious Peter was to die during the Ultimatum event, yet someone chickened out of pulling the trigger. So, we ended up with a relaunched title that accomplished nothing until they finally killed Peter and decided to move forward. This is just another step in that forward momentum. If you hate the idea, fine. this clearly isn’t for you. I don’t like half the shit you all tell me is awesome. The difference, however, is that I typically check it out for myself before making that decision. This isn’t Civil War II or another trip to the Age of Apocalypse. You only THINK you know what’s going to happen, but it’s  somewhat uncharted territory. Unlike events that exist solely to set up the next one, I can see a lot of positives that could come out of this. I only hope that I’m right.